Learning Shapes, Making a Princess Castle and a Rocketship

I created this printable shapes craft initially as an exercise to help my 3-year old daughter recognize and name shapes. I used colored match sticks

to create and talk about the basic shapes. But what was intended to be a 5-minute activity became a prolonged exercise, as she asked me to create other things out of the colored match sticks. 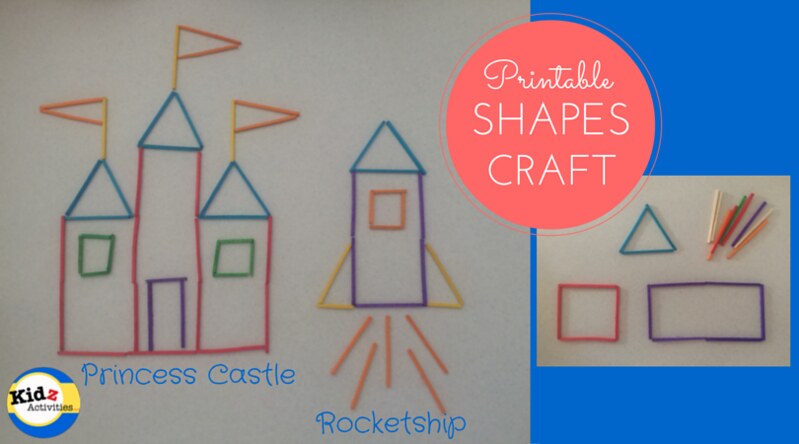 I started by creating 3 basic shapes (triangle, square and rectangle) out of colored match sticks. I extended on this by…

This activity only took about 3-minutes. After which, she asked me to create a house, a star and a princess castle using the colored match sticks. As I tried to create a princess castle for her, she went ahead and did her own little creations. One of which was a shape with 5 sides. She asked me what that was. We counted the sides, then I told her she created a 5-sided shape called a ‘pentagon.’ She repeated the word. And although she probably won’t remember that big word, she was beaming with pride that she created such a shape.

After we had created a Princess castle and a Rocketship together, I then realized that this would be a great craft activity that she could do on her own. So I then created this Printable Shapes Craft templates…

What you need to make this shapes craft:

What the children need to do:

Make this an open ended activity by allowing the kids to create things from their own imagination.

Is there any other object your kids would like to recreate using colored match sticks? We’d love to hear your ideas… maybe one day, we can create a free printable template of your idea!